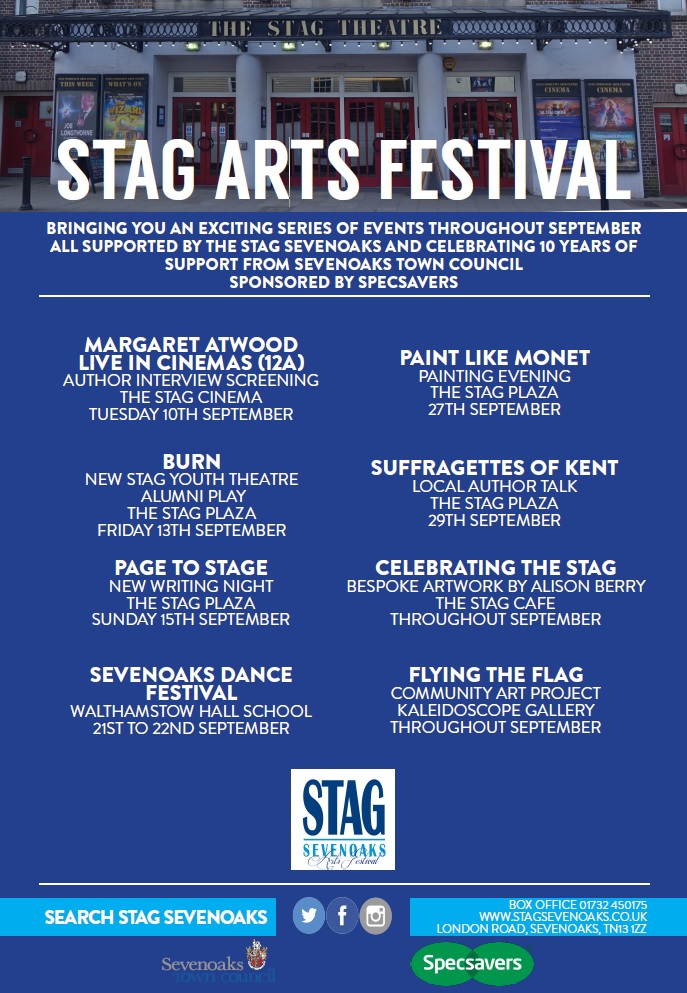 The Stag Arts Festival, which runs throughout September and is sponsored by Specsavers, will this year celebrate 10 years since Sevenoaks Town Council took over the management of the arts venue changing it to a not for profit charity.

Events featuring in this year’s Stag Arts Festival include:

September 10th – A live screening in the Stag Cinema of author Margaret Atwood’s interview at the National Theatre about her hotly anticipated sequel to The Handmaid’s Tale.

September 13th – New play Burn presented by former members of the Stag Youth Theatre (SYT) and written by their leader Simon Cossons.A series of exciting new short plays chosen to be performed as part of the Page to Stage new theatre writing night.

September 15th – A series of exciting new short plays chosen to be performed as part of the Page to Stage new theatre writing night.

“We are delighted to offer this great line-up for our second arts festival. Since we became a charity in 2010, The Stag has helped generate more than £9million for the local economy and we are enormously proud of that. This is an opportunity to join us in celebrating and thanking all those who have and continue to support us both on and offstage.”

To celebrate just some of the successes of the arts venue over the last ten years, artist Alison Berry has been commissioned to create a unique piece of art for The Stag which is now on display on the art wall in the cafe.

Throughout September, there will also be a display of specially made bunting flags by local people at the Kaleidoscope Gallery as part of the Flying the Flag community art project. Part of the Stag’s festival, the display is in partnership with the Sevenoaks Visual Arts Forum which also celebrates its 10h anniversary this year.

Despite difficult times for arts venues across the country, The Stag has continued to develop. It is now 97% grant free and relies on the sponsorship and support of local businesses, hiring out its facilities to professional and amateur shows, its cinema and donations.